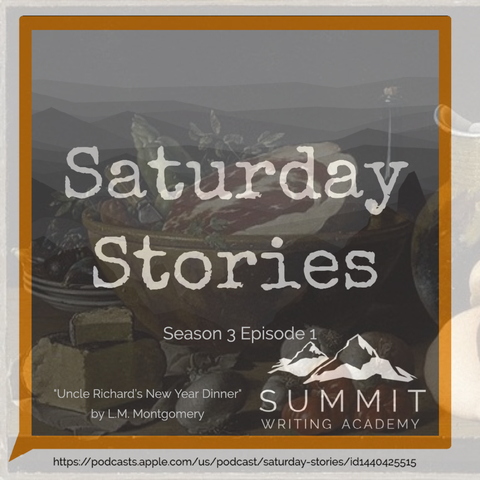 What's the episode about?

"We must not only speak about forgiveness and reconciliation, we must act on these principles."

1.Prissy is in the store when she overhears Uncle Richard saying he doesn't have anyone to cook him his New Year dinner.

2. On her way home from the store Prissy decides to forgo reading her book, and instead cook him dinner.

3. But, she’s worried because she knows that eight years ago, her father and Uncle Richard quarreled about a piece of property and they haven't spoken since.

4. Despite this, Prissy breaks into her uncle’s house, starts cooking dinner and is putting on the finishing touches when uncle Richard returns home earlier than expected.

5. Terrified that her uncle will be angry and order her from the house she stutters out a guilty explanation.

6. Thankfully, Uncle Richard appreciates her kind gesture although he is worried about what Prissy’s father, his brother, thinks about her being there.

7. Uncle Richard insists that she stay for dinner, the quarrel with his brother forgotten, and even asks Prissy to come back for future New Year’s dinners.

It will help you improve your reading comprehension and build your vocabulary.

Her family considered writing to be a waste of time. She even smuggled candles to her room so that she could write at night. In The Alpine Path, she said, "I struggled on alone, in secrecy and silence. I never told my ambitions and efforts and failures to anyone. Down, deep down, under all the discouragement and rebuff, I knew I would 'arrive' someday."

Let's dive into this short story and start the New Year off on a good note.

Prissy Baker was in Oscar Miller's store New Year's morning, buying matches—for New Year's was not kept as a business holiday in Quincy—when her uncle, Richard Baker, came in. He did not look at Prissy, nor did she wish him a happy New Year; she would not have dared. Uncle Richard had not been on speaking terms with her or her father, his only brother, for eight years.

He was a big, ruddy, prosperous-looking man—an uncle to be proud of, Prissy thought wistfully, if only he were like other people's uncles, or, indeed, like what he used to be himself. He was the only uncle Prissy had, and when she had been a little girl they had been great friends; but that was before the quarrel, in which Prissy had had no share, to be sure, although Uncle Richard seemed to include her in his rancour.

Richard Baker, so he informed Mr. Miller, was on his way to Navarre with a load of pork.

"I didn't intend going over until the afternoon," he said, "but Joe Hemming sent word yesterday he wouldn't be buying pork after twelve today. So I have to tote my hogs over at once. I don't care about doing business New Year's morning."

"Should think New Year's would be pretty much the same as any other day to you," said Mr. Miller, for Richard Baker was a bachelor, with only old Mrs. Janeway to keep house for him.

"Well, I always like a good dinner on New Year's," said Richard Baker. "It's about the only way I can celebrate. Mrs. Janeway wanted to spend the day with her son's family over at Oriental, so I was laying out to cook my own dinner. I got everything ready in the pantry last night, 'fore I got word about the pork. I won't get back from Navarre before one o'clock, so I reckon I'll have to put up with a cold bite."

After her Uncle Richard had driven away, Prissy walked thoughtfully home. She had planned to spend a nice, lazy holiday with the new book her father had given her at Christmas and a box of candy. She did not even mean to cook a dinner, for her father had had to go to town that morning to meet a friend and would be gone the whole day. There was nobody else to cook dinner for. Prissy's mother had died when Prissy was a baby. She was her father's housekeeper, and they had jolly times together.

But as she walked home, she could not help thinking about Uncle Richard. He would certainly have cold New Year cheer, enough to chill the whole coming year. She felt sorry for him, picturing him returning from Navarre, cold and hungry, to find a fireless house and an uncooked dinner in the pantry.

Suddenly an idea popped into Prissy's head. Dared she? Oh, she never could! But he would never know—there would be plenty of time—she would!

Prissy hurried home, put her matches away, took a regretful peep at her unopened book, then locked the door and started up the road to Uncle Richard's house half a mile away. She meant to go and cook Uncle Richard's dinner for him, get it all beautifully ready, then slip away before he came home. He would never suspect her of it. Prissy would not have him suspect for the world; she thought he would be more likely to throw a dinner of her cooking out of doors than to eat it.

Improve your writing in less time with Summit Writing.

You'll get a guided writing assignment and personalized feedback.

Eight years before this, when Prissy had been nine years old, Richard and Irving Baker had quarrelledover the division of a piece of property. The fault had been mainly on Richard's side, and that very fact made him all the more unrelenting and stubborn. He had never spoken to his brother since, and he declared he never would. Prissy and her father felt very badly over it, but Uncle Richard did not seem to feel badly at all. To all appearance he had completely forgotten that there were such people in the world as his brother Irving and his niece Prissy.

Prissy had no trouble in breaking into Uncle Richard's house, for the woodshed door was unfastened. She tripped into the hostile kitchen with rosy cheeks and mischief sparkling in her eyes. This was an adventure—this was fun! She would tell her father all about it when he came home at night and what a laugh they would have!

There was still a good fire in the stove, and in the pantry Prissy found the dinner in its raw state—a fine roast of fresh pork, potatoes, cabbage, turnips and the ingredients of a raisin pudding, for Richard Baker was fond of raisin puddings, and could make them as well as Mrs. Janeway could, if that was anything to boast of.

In a short time the kitchen was full of bubbling and hissings and appetizing odours. Prissy enjoyed herself hugely, and the raisin pudding, which she rather doubtfully mixed up, behaved itself beautifully.

"Uncle Richard said he'd be home by one," said Prissy to herself, as the clock struck twelve, "so I'll set the table now, dish up the dinner, and leave it where it will keep warm until he gets here. Then I'll slip away home. I'd like to see his face when he steps in. I suppose he'll think one of the Jenner girls across the street has cooked his dinner."

Prissy soon had the table set, and she was just peppering the turnips when a gruff voice behind her said:

"Well, well, what does this mean?"

Prissy whirled around as if she had been shot, and there stood Uncle Richard in the woodshed door!

Poor Prissy! She could not have looked or felt more guilty if Uncle Richard had caught her robbing his desk. She did not drop the turnips for a wonder; but she was too confused to set them down, so she stood there holding them, her face crimson, her heart thumping, and a horrible choking in her throat.

"I—I—came up to cook your dinner for you, Uncle Richard," she stammered. "I heard you say—in the store—that Mrs. Janeway had gone home and that you had nobody to cook your New Year's dinner for you. So I thought I'd come and do it, but I meant to slip away before you came home."

Poor Prissy felt that she would never get to the end of her explanation. Would Uncle Richard be angry? Would he order her from the house?

"It was very kind of you," said Uncle Richard drily. "It's a wonder your father let you come."

"Father was not home, but I am sure he would not have prevented me if he had been. Father has no hard feelings against you, Uncle Richard."

Not sure where to start?

By the end of this webinar, you'll know exactly how to:

Sign up now for this live, interactive webinar, and get ready to level up your writing skills.

"Humph!" said Uncle Richard. "Well, since you've cooked the dinner you must stop and help me eat it. It smells good, I must say. Mrs. Janeway always burns pork when she roasts it. Sit down, Prissy. I'm hungry."

They sat down. Prissy felt quite giddy and breathless, and could hardly eat for excitement; but Uncle Richard had evidently brought home a good appetite from Navarre, and he did full justice to his New Year's dinner. He talked to Prissy too, quite kindly and politely, and when the meal was over he said slowly:

"I'm much obliged to you, Prissy, and I don't mind owning to you that I'm sorry for my share in the quarrel, and have wanted for a long time to be friends with your father again, but I was too ashamed and proud to make the first advance. You can tell him so for me, if you like. And if he's willing to let bygones be bygones, tell him I'd like him to come up here with you tonight when he gets home and spend the evening with me."

"Oh, he will come, I know!" cried Prissy joyfully. "He has felt so badly about not being friendly with you, Uncle Richard. I'm as glad as can be."

Prissy ran impulsively around the table and kissed Uncle Richard. He looked up at his tall, girlish niece with a smile of pleasure.

"You're a good girl, Prissy, and a kind-hearted one too, or you'd never have come up here to cook a dinner for a crabbed old uncle who deserved to eat cold dinners for his stubbornness. It made me cross today when folks wished me a happy New Year. It seemed like mockery when I hadn't a soul belonging to me to make it happy. But it has brought me happiness already, and I believe it will be a happy year all the way through."

"Indeed it will!" laughed Prissy. "I'm so happy now I could sing. I believe it was an inspiration—my idea of coming up here to cook your dinner for you."

"You must promise to come and cook my New Year's dinner for me every New Year we live near enough together," said Uncle Richard.